Do blue-black spots on a golden’s tongue mean a chow mix?

The answer is no!

The Chow Chow’s blue-black tongue is one of the breed’s most well-known physical characteristics. It’s also the most misunderstood. The Chow is one of the most ancient breeds and is the ancestor of many breeds of today. The origin of the Chow’s black tongue is a mystery; no one knows how or why he came to have it. The Chow is not the only breed with a blue-black tongue. The Chinese shar-pei shares this trait as well. A few other animals have black tongues, too: the giraffe, polar bear, and several breeds of cattle including the Jersey.

Blue-black spots on tongues are very common in dogs — more than 30 pure breeds, including golden retrievers, are known to have members with spotted tongues. Spots on tongues are simply deposits of extra pigment, like birthmarks and freckles on people. Dogs often have spots of dark pigment on their skin, too, hiding under their coats. These spots can be large or small, many or few.

Is this a Chow mix? 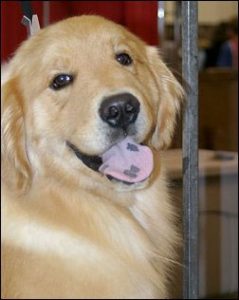 No, it’s an AKC show-quality golden retriever waiting his turn to compete at a dog show.